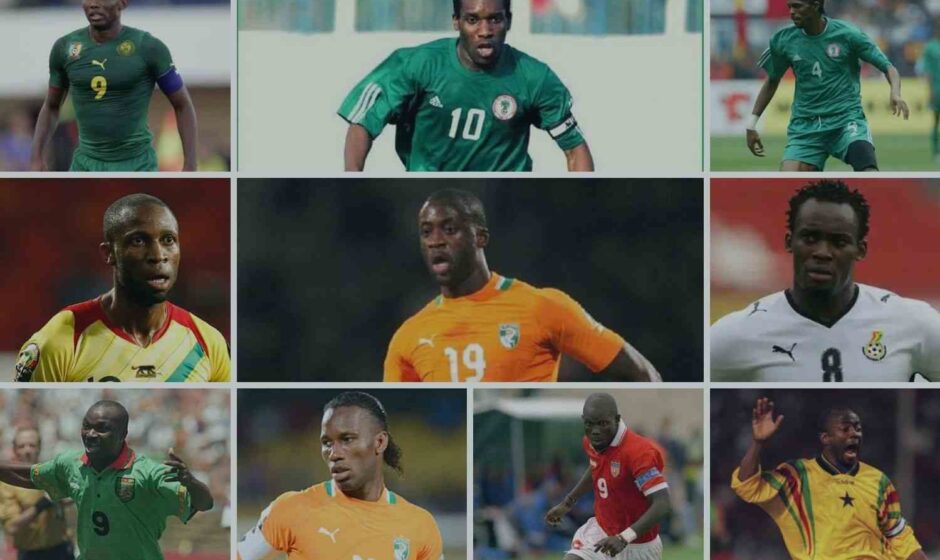 Players from the continent of Africa who have played the beautiful game of Football have rarely been the toast of people’s focus and plaudits. It has always been skewed towards European big names.

However, the fact remains that many African talents have played and still play the beautiful football game.

Several of them have blessed followers of the game with memorable moments that linger for years and this sporticle is about 10 of these great football players of all time from Africa who have created a truly delicious sensation that lingers in our hearts.

His greatest achievements in the international scene with his country were his 2010 World Cup quarter final appearance and 2015 AFCON runner-up. Compared to his illustrious club career, this is inferior. Essien was not as successful with Ghana as he was with his clubs.

Essien emerged into the scene with the amazing Lyon team of 2003 – 2005. He was later bought by Chelsea in 2005 where he blossomed and won two Premier League titles and a Champions League title. He finished his illustrious 20-year club career in 2020 at Azerbaijan club, FK Sabail.

Named after the famous Brazilian footballer, Pele who is no doubt one of the greatest players in the world, Abedi Pele became a star for Ghana and Marseille in the early 1990s.

Abedi Pele was a key feature for Marseille and helped them win the Champions League final in 1993 and consecutive Ligue 1 titles in 1990/91 and 1991/92 seasons.

Abedi Pele won the AFCON title in Ghana in 1982 and was selected as the tournament player ten years later when the Black Stars lost to Cote d’Ivoire.

He was named one of the top three Africans in history by the International Federation of Football History & Statistics (IFFHS) and three times African Player of the Year. Sadly, he didn’t have the opportunity to prove his skills at the World Cup with Ghana.

The Ivorian led his country to win the AFCON title at Côte d’Ivoire in 2015 and won African Players of the Year award four times and two times a runners-up. It’s only natural for Toure to be on the list.

Toure also won two La Liga titles with Barcelona and three Premier League titles with Manchester City where he blossomed into a global star and was the driving force behind the club’s success.

Keita was a consistent player in the first team of Pep Guardiola’s Barca which is considered one of the greatest football teams of all time.

With a height of 1.97m and a slim physique, Kanu was an elegant footballer with excellent movement, intelligence, nimble footwork, and technical skills, hence why he was dubbed “football king”.

Kanu is a two-time African Player of the Year, who won several trophies and titles including the Premier League at Arsenal, the UEFA Champions League at Inter Milan, and the FA Cup at Arsenal.

The forward represented Nigeria at three World Cups and won an Olympic gold medal in 1996. He also won the UEFA Cup at Inter Milan, the Dutch Eredivisie three times at Ajax. He is considered the greatest Nigerian player of all time and a legend of Arsenal, Ajax and  Portsmouth.

Perhaps the most legendary African player in history, veteran striker Roger Milla was the star of the Cameroonian team that made history at the 1990 World Cup.

Milla led Cameroon at the 1990 World Cup to become the first African team to reach the quarterfinals of the tournament at the age of 38.

The two-time African Player of the Year played against Russia in the 1994 World Cup at the age of 42 and scored becoming the oldest player to ever score in the tournament. He also helped the indomitable Lions win the AFCON title in 1984 and 1988.

In 2007, the Confederation of African Football named Milla the best African player in the last 50 years.

Though his club career was not adorned with titles and glories, he scored more than 400 goals and played for several teams in the French Ligue 1.

When it comes to pure talent and tricks, no one gets close to Jay Jay. “He’s so good, they named him twice.”

Okocha’s technical skills were so eye-catching and outstanding that he was one of the most talented players of his generation.

He won the AFCON in 1994 and won an Olympic gold with Nigeria two years later. In 2004, he was AFCON’s top scorer and the most outstanding individual player in the tournament. He won numerous individual awards including two BBC African Player of the Year awards.

Okocha played for Fenerbahce, Paris Saint-Germain, Bolton and has never won a league title. He also represented Nigeria at 3 World Cups, 1994, 1998 and 2002.  For a player with his abilities, his trophy cabinet is underwhelming.

Nevertheless, Okocha was aesthetically pleasing and made football fun with his ridiculous tricks and bold talents, he remains an icon of African football.

One of the greatest Premier League strikers and a legend of Chelsea. Drogba’s achievements at the club level superseded that of his home country Côte d’Ivoire.

Popularly called “King George” during his playing days, George Weah was recognised as the greatest African player of the 20th century.

Weah is the only African footballer to have won both the Ballon d’Or and the FIFA World Player of the Year in 1995. He was also named the African Player of the Year three times and won two Serie A titles at AC Milan after helping PSG win the league title in 1994.  Weah scored over 200 goals in his professional career.

He is a Liberia national hero and now the President of the country.

Samuel Eto’o was an exceptional footballer who made it at the highest levels of European football.

Eto’o was awarded the African Player of the Year title four times and represented the indomitable Lions at three World Cups. He won an Olympic gold medal in 2000, and helped Cameroon win the AFCON title on two occasions in 2000 and 2002.

He scored 130 goals at Barcelona and was named man of the match when Barca defeated Arsenal in the 2006 champions league final. Eto’o won two UEFA Champions League titles with Barca and scored in both finals.

At Inter Milan in 2010, he also won the UCL and FIFA Club World Cup. He was twice named in the Team of the Year by both UEFA and FIFA and finished third in the 2005  FIFA World Player awards. 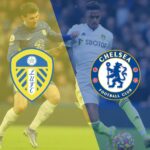 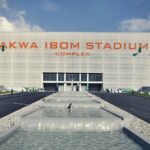